There are four items below: my essay The Fictional Einstein; an added note on a published article I wrote with Dwight Vincent that appeared in Physics Today; a note about Alan Lightman's book on Einstein; and my letter-to-the-editor that was in the NY Review of Books.

Since the editor of the Physics Today journal edited out the biographical part of our paper,
I have added this story below, because I think it will be of interest to most readers.


Born on October 2, 1937, Johanna was the daughter of Herman Mankiewicz, a writer, who collaborated with Orson Welles on the movie Citizen Kane. His brother was Joseph Mankiewicz, the famous producer and director, and hence Johanna grew up in the atmosphere of Hollywood, with Jane Fonda as a childhood chum. Since she was living within the world of notoriety and stardom, I wonder how much the idea of writing a letter to Einstein was of her own volition, and especially whether she alone initiated the press photos and interviews. Of course, we can only leave these as probably unanswerable questions.

Her brother was Frank Mankiewicz, who went on to a career in journalism and became involved in politics. He is best remembered as Robert Kennedy’s press secretary, who announced Bobby’s death to the press after the assassination on June 6, 1968. His son, Ben, is the TV host on Turner Classic Movies.

After High School graduation, Johanna went east to Wellesley College where she met and married a Harvard University student, Peter Davis. They had two children, and she started a writing career, eventually working for Time magazine, and even publishing in 1973 a novel, Life Signs. The book was well received by reviewers, and even spent some time on the NY Times best-seller list. As her career was taking off, so was that of her husband, who was working in TV and movies, focusing on issues of social conscience. Indeed, he went on to win an Oscar for his feature documentary on Vietnam, Hearts and Minds (1975), which is considered a classic today by many film buffs. Davis’s acceptance speech on April 8, 1975 before the Academy, however, was bittersweet. The previous year, on July 25, 1974, Johanna was walking in their neighborhood of Greenwich Village with their 11-year-old son, Timothy, when she was struck by a taxi and pinned against a mailbox. She died at the age of 36. Timothy was unhurt (LA Times, July 27, 1974, p. B3).

I recently came across a website trying to revive her novel, calling Life Signs a neglected book. I read Life Signs, and found it partially but plainly autobiographical: the main character (Camilla) lives in New York, but she grew up around Hollywood; her father is a movie writer and her Harvard-graduate husband makes documentaries. The book is smartly written and both witty and bleak. Haunting the text for this reader, needless to say, was the knowledge of Johanna’s shocking death. Yet I still broke out with a chuckle when Camilla said at one point that “she had always been good at math,” but I discernibly felt a deep chill when Camilla was crossing a street in New York and she was almost hit by a truck.


A Note on Einstein’s Dreams, by Alan Lightman (1994):
Or, why this book is not an historical novel about Einstein

Lightman’s little book is beautiful but strange. It is set in 1905 Berne, when Einstein was working in the patent office with his best friend Michele Besso. It consists of 30 very short chapters, dated from April 14 to June 28, each being a dream about a world with a different concept of time. In addition, there is a Prologue, three Interludes, and an Epilogue. (I should point out that it was during this period of Einstein’s life, specifically from March 18 to September 27, that he submitted his four revolutionary physics papers to the German Physics journal. In particular, on June 30, he sent the first paper on relativity that put forth his new theory about time.)
In the Prologue, Einstein is waiting for a secretary to arrive, since he has a paper on relativity for her to type.  In the Epilogue, he gives her the paper.
In the Interludes, Einstein is with Besso: going for a walk, in a café, and fishing from a boat in the river. In these episodes, Einstein is absent-minded, even moody, distant, and almost incommunicative. There is very little real engagement between them – this, despite the fact, that Einstein thanked Besso, and only Besso, for his help with the paper on relativity. (Lightman does not mention this.)  Importantly, there is no discussion about the concept of time between them, even though historians have evidence that something Besso said was a catalyst for the idea of the relativity of time. (Lightman does not mention this, either.) Also, there is a brief mention of Einstein’s wife and son, but otherwise nothing on his life.
In the 30 chapters of dreams, different concepts of time are considered. For example: time going in a circle, time standing still, a world without time, time going backwards, a world where people live forever, a world without a future, and so forth. Only one dream, on May 29th, where time slows down as people move faster, has any relevance to Einstein’s theory.
Now, importantly, there is no evidence that Einstein ever considered the other 29 concepts on his road to relativity, nor that such ideas would even emerge in terms of the problems he was working on.  I find this all extremely odd.  Lightman could have carved out these lyrically written fantasies about other worlds with other times, without bringing in Einstein. That’s why I call this book beautiful but strange.  Why he wrote it this way, I do not tknow.
Moreover, the scope of the novel is only this very short period (two months, however important they were) in Einstein’s life. I therefore cannot categorize this little book as an Einstein novel in any meaningful sense of the term.  It is more fantasy than history. It least, it certainly cannot be considered an Einstein novel in any comprehensive sense. 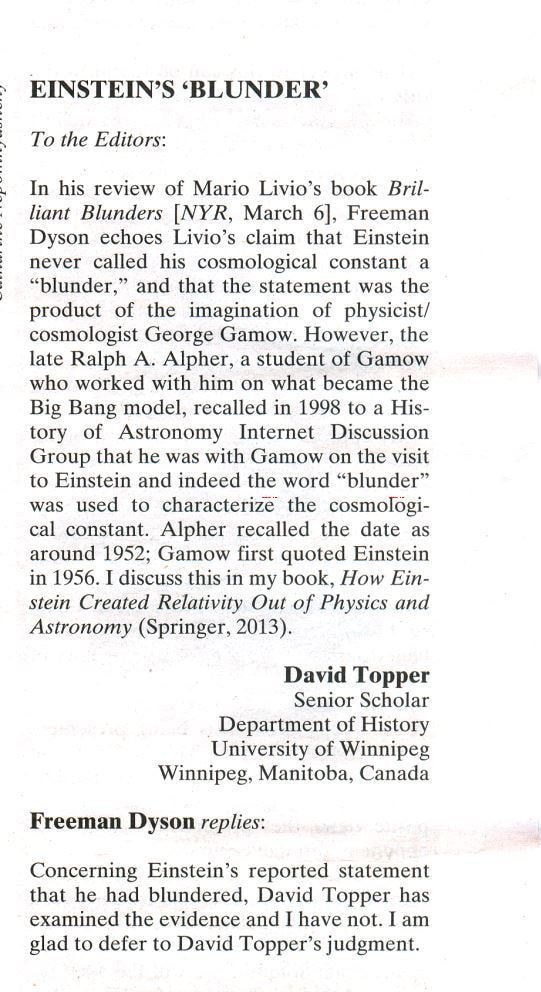 This Letter to the Editor
appeared in the
May 8, 2014 issue of the
New York Review of Books.